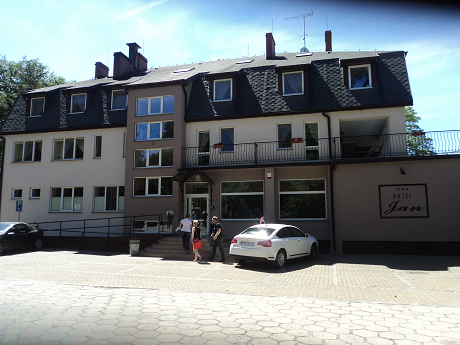 The owner of the rooms is „KAPOST” Sp. z o.o. The decision on the purchase and modernization of the building was made in 2002 after a tragic death of one of the founders and shareholders of the company, Mr Jan Kabaciński. His vision of development of tourism included not only modernization of the existing building but also development of the infrastructure of the whole commune. The plans he did not manage to carry out form the foundations of tourism development for „KAPOST”. His name has been given to the guesthouse where you can stay for the night or make use of other services. The facility was commissioned on 1st June 2003. At the beginning the building had 10 rooms to be extended by another 10 in January 2004. The company’s involvement in the development of tourism also includes a construction of a playground and a cafe on the water where. Your stay will be more attractive by water sport equipment, such as kayaks, rowing boats, pedal boats and surfboards, that can be hired on the public supervised beach in summer. Our exquisite cuisine owes not only to one of the best chefs in Poland but also to young cooks who, at your request, will compose any meal, both Polish and overseas. Welcome! Jan’s Staff